Parking Your Plane in Denver

Parking Your Plane In Denver

The Metro Denver area has 5 airports, including the military airfield at Buckley Air force Base. Unless you need to park an F-16, we will limit our discussion to the other 4 civilian facilities.

First and foremost is the areas enormous commercial facility, Denver International Airport (DEN). Located to the northeast of downtown, a 45 minute cab ride away, the unmistakable architecture of the Jeppesen Terminal is a centerpiece for the 6 all weather runways, including a 16,000 foot long, 200 hundred feet wide monster designed to assist the heaviest, fully loaded airplanes in existence to climb into the thin Denver air bound for London or Tokyo. DIA was ranked as the 5th busiest airport in the country, and 13th in the world in 2008. Denver's airport is the largest in the country at 54 square miles, and the second largest in the world. It was designed to accommodate growth well past the year 2050.

Although primarily an airport for commercial air traffic, the facility can accommodate business aviation, and Signature Flight Supportoperates a business terminal (FBO) at DIA. 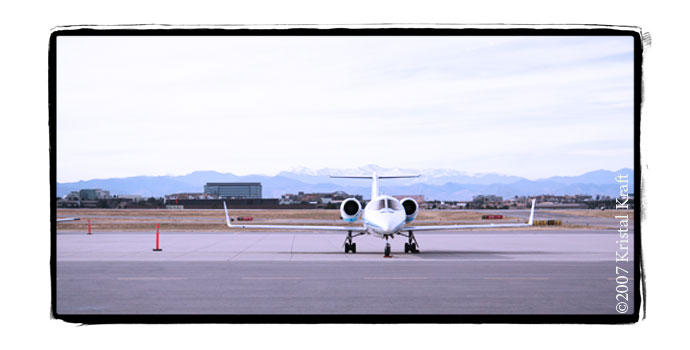 Signature Flight Support operates another FBO at Centennial Airport, (KAPA). Located southeast of central Denver in Arapahoe County, Centennial is one of the busiest general aviation airports in the world, and it "biz-jet" activity rivals many major airports. In addition to Signature, the airport is served by 4 other fixed base operators. Centennial maintains 24 hour, all weather operation, operating one 10,000 foot runway along with 2 shorter runways. The FAA operates a 24 hour control tower, and there is 24/7 U.S. Customs Service at the facility.

RMMA is located northwest of downtown Denver, midway to Boulder Colorado. The FAA maintains a control tower that operates from 0600 to 2200 hours 7 days a week, although the airport is operational 24 hours a day. The longest runway is 9000 feet, which easily accommodates the large firefighting aircraft which utilize the field at times. There are 2 FBO's on site and U.S. Customs officers during the day, Monday through Friday.

Located east of the city, and just south of the approach zone for Denver International, Front Range Airport serves general aviation needs. Envisioned as a cargo reliever airport for DIA, the facility has two 8000 foot runways, and operates with an FAA licensed control tower from 0700 to 2100 hours. There is a FBO at the airport, but no customs facilities.