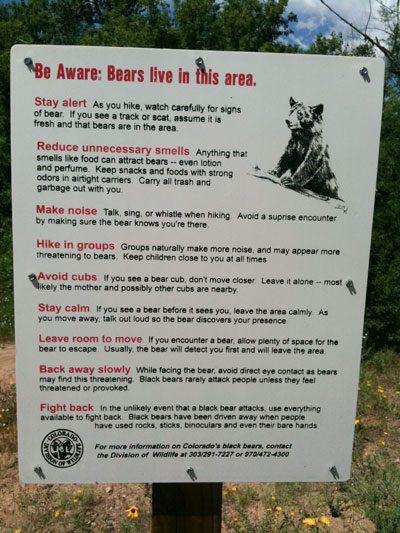 Lately there's been a lot of bear sitings. A few days ago there was a bear who fell out of a neighborhood tree onto a trampoline. The bear was tranquilized and woke up ok, the trampoline was trashed. Another bear cub wandered into a kitchen to gather a treat. Both fuzzy creatures were relocated out of the city.

Two weeks ago a we were attending a conference when a friend of ours spotted a bear walking around the resort in Crested Butte!  Bears in a small mountain town are not usual to see, but when they come into large metro areas as they did last week, it makes me wonder.

I would love to see a bear, but I want to see one on my terms, from the safety of a house or my car. I don't want to surprise one of stumble over a bear cub while hiking in the back country.

Of course what I want is not always what I will get. Being prepared for whatever comes my way is probably the best.

Today we were cycling around Chatfield Reservoir in Littleton where this sign was posted.  I had to stop my bike and snap a shot of this sign just so I could commit it to memory.

I also thought it might be helpful to anyone who might find themselves with a bear bouncing on their trampoline.