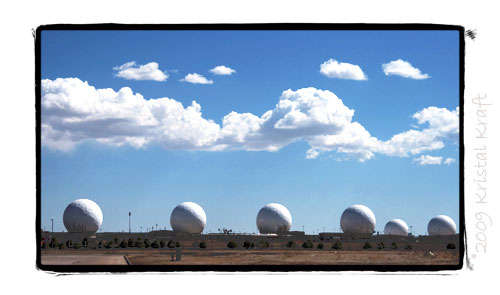 Buckley Air Force Base and the Giant Golf Balls

Looking ever so much like golf balls lined up for practice swings from a giant golfer, the picture above shows just some of the 15 protected satellite dishes that Buckley Air Force Base is known for.  Visible from Lookout Mountain, the distinctive "Golf Balls" house the communication links that serve the Aerospace Data Facility, one of the many tenants of the 460th Space Wing, which manages Buckley AFB.  Other major tenants include the 140th Wing, flying F-16's; the Army Aviation Support Facility; and some 34 other military units, representing every branch of the armed forces (including the Coast Guard), with active, reserve and national guard components in residence.  Buckley houses some 10,000 military and civilian employees, and supports some 90,000active and retired military men and women and their dependents.

Buckley has one 11,000 foot runway; capable of servicing every type of aircraft operated the armed forces.  Although the growth of Aurora has impacted the base in a few ways, some care has been taken to avoid building residences close to the approach zone of the runway. For the most part the occasional whine of an F-16 or the "thump-thump"sound of an Apache helicopter is more reassuring than irritating.

Neighborhoods in close proximity to Buckley include Murphy Creek (reasonably priced homes on a golf course), Smoky Hill, Saddle Rock, Wheatlands, and a large number of subdivisions in South Aurora and Centennial.