Last weekend Denver Post writer, Christian Toto published an article "Basement remodel a warm and wise idea". The gist of the article was how a finished basement gives added appeal when reselling a home, plus a comfortable living space to the homeowner while living in the home.

I made a comment in the Denver Post article that causes several people to look me up and call. Here's my quote:

Kristal Kraft, a broker associate with the Berkshire Group Realtors, says do-it-yourself types should proceed cautiously when renovating a basement.

Homeowners must get a permit before they start such a project, Kraft says.

Counties often have differing building requirements, so even if a Denver transplant knew the rules in his or her old state, they may be different here, especially when it comes to local soil issues.

Kraft says she has had deals fall through because of permit issues.

"Whatever time, trouble and money they save on the front end, they lose on the back end when selling," she says.

I was surprised by the confusion from my statement. One gentleman wanted to know "If I finish my basement without getting a permit, who would know?"

From my perspective as a real estate broker, there are three ways I might know:

Home inspectors are generally very good about locating "clues" to determine if a basement was completed without a permit. Such clues would relate to items not being finished to code.

When a seller hires a broker to sell the home, the homeowner fills out a Colorado approved Seller's Disclosure form. On this form there is a question relating to the status of the "improvements." If known the seller must disclose to the prospect whether the improvements were made without a permit. 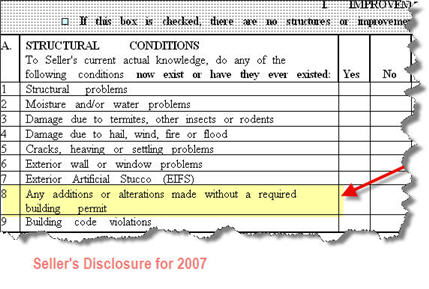 AH! My last statement is no longer true. Upon investigation I've learned the Colorado approved Seller's Disclosure form has changed. No longer is the question asked about the improvements! 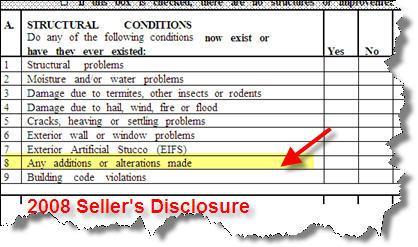 This discussion now turns in yet another direction!

My question is "why did the Colorado Approved Seller's Disclosure" form change? Was is a error? Are they merely asking a question without leading to the next question?

Why is this important to know? I believe it is important to disclose all the facts to the consumer. As a real estate broker I DON'T MAKE THE DECISION to purchase, the buyer does. I want them to be able to make the decision based on facts. Correct facts.

If the buyer should decide to go forward with the purchase of a home that had a basement finished without a permit, they are taking on all the responsibilities and obligations of that decision.

Let me clarify something. the lack of a building permit could mean the work is shoddy, but not necessarily so. It just means that at some point in the future to sell the house the current owner may have to go back and have the work permitted.

My Denver Post remark is a reflection of the hassle it would be to opt not to get a building permit at time of construction, then have to do so later when one wants to sell the house! It had little if anything to do with the quality of construction.

Of course quality of construction can also make or break the improvement when it comes to resale. Do It Yourselfers (DIY) often fail to build properly. A couple years ago I had a transaction hit the rocks because the basement, (done nicely on the surface) was not built according to code. The walls were built directly on the concrete in an area where they should have been floating. This mistake was major. It meant if the foundation moved the walls would push and heave the home, causing havoc upstairs.

The remedy was to remove the offending walls and do the job right. It was worse than having to finish a basement. All the existing basement walls had to be removed and rebuilt.

Now had the homeowner followed the proper channels he would have avoided this issue. I don't know what a building permit costs, but I would bet it is a lot cheaper than redoing the basement!

So I stand by my original statement, when finishing off a basement or any other home addition, do it right. Get a building permit.

Next time I might blog about the design mistakes people make when finishing off a basement!