Thanks to The Holiday Blizzard of 2006 Colorado is CLOSED!

The highways to the borders in every direction are closed (with the exception of the Denver metro area).  If you are in Colorado you are here until the storm passes.  If you aren't here, you won't be getting here anytime soon.

The snow is supposed to stop by late morning on Thursday. DIA is scheduled to remain closed until 7 p.m. Thursday.  Until the snow stops these are just estimates. 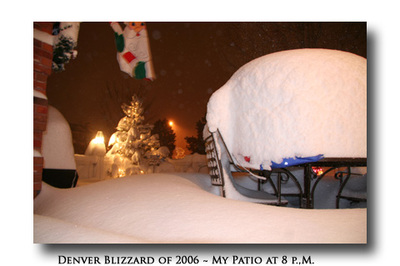 All in all the storm for me has been fun.  I knew it was coming so I planned to not travel, except to the grocery store. That for me,  was excitement enough.  I got out and back ok, but when I tried to get the car in the garage, I ended up beaching it on the unplowed street.  So, instead of having a workout at the gym today, I substituted a workout with a snow shovel.  I shoveled my driveway and part of the street.  My car is safely in the garage and that is where it will stay.

I feel sorry for the 3000 people stranded at the Airport.  It's been reported some may not reach their destination  until Sunday. That's a long time.  I wish I could help.