As with any large metropolitan area, there tends to be concentrations of businesses or employment centers. Denver is no different.  Without resorting to a map, we will start downtown, and work clockwise with 12:00 being due north:

Downtown-pretty much right in the center of the metro area, downtown Denver is certainly a major area of 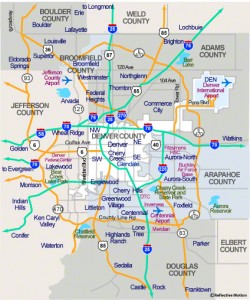 employment, as well as the cultural and entertainment center for not just Denver, but also the half
dozen states bordering Colorado.  The major sports venues, the restaurant and night life of LODO, the Colorado Capital and state government, the cultural attractions of the Denver Art Museum and the Performing Arts Center (DCPA), and the inner city Auraria Campus of Metropolitan State College, and the University of Colorado at Denver, all come together to create a work, learn, live and play vitality that makes Denver live large.

Denver International Airport (DIA) lies 20 miles northeast of downtown Denver, about 1:30 on the clock.  In between downtown and the airport exists much of the warehousing and shipping operations that make Denver a hub for the Rocky Mountain West.  As the worlds 10th busiest airport, DIA is a very large employment center indeed.

Fitzsimons ~ Straight east of downtown Denver, at about 3:00 o’clock, is the Anschutz Medical Campus. Located on the site of the former Fitzsimons Army Medical Center, the campus is home to 30,000 employees and students of the University of Colorado’s teaching hospital, and Children’s Hospital. The
Veterans Administration will soon build a new facility on the campus, and with bio-medical research located on the campus, the Anschutz center is taking its place among world class health and research facilities.

Buckley Air Force Base ~ A little further to the east and a bit south, say at 3:30 on our clock, Buckley Air Force Base is home not only to a myriad of United States Air Force operations, but also serves as the Denver area’s military home for units representing every branch of the armed forces, and is a center for many military retirees that call Denver home. Off base there is a thriving military-industrial employment center.

In the next post, we will move
south toward 6:00 o’clock and the Denver Tech Center Part 2.