The average price for single family homes increased 4.28% year-over-year from 2009, while the average condo price (which includes lofts and most of the Downtown housing), and actually declined from May of 2009.  There are most likely many reasons for this, including high unemployment, overbuilding of the market segment, a potential shift in desired housing trends (more people renting because of economic uncertainty), or maybe a short term societal trend that has graduating children returning home to live for their first few years while they establish themselves in the “real world” in order to save money to buy their first home. Condo values will continue to suffer against the larger market. The single family home median price for May is $10,000 higher than the same time last year at $230,000. 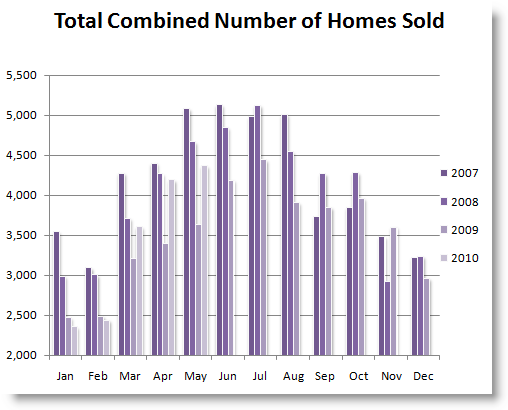 As expected, closing (sold) activity remained very strong in May as the result of closing the many homes placed “under contract” during the April “tax credit” rush. May of 2010 showed an increase of 20.3% in homes closed over May 2009. However, the number of new “under contracts” dropped 27% in May 2010 over May of 2009, and the May “under contracts” dropped 41% from the preceding month of April.  A decrease in under contracts after the April rush was not unexpected, with the percentage of decrease expected to be high. After 18 months of the home market being subjected to tax incentive stimulation, we must let the market determine its equilibrium.  Easy to write about, but it has the prospect of being painful to a housing industry that is already beaten up. 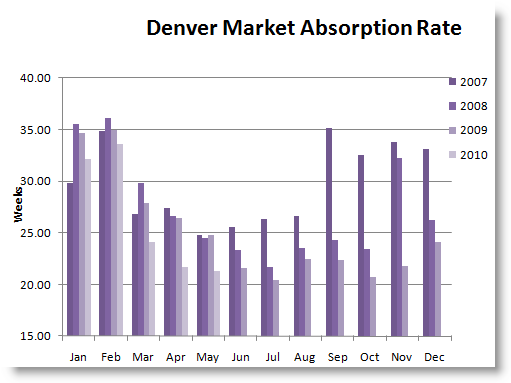 Although the absorption rate is down to 21.28 weeks, the market is still bifurcated.  A recent NAR survey indicated that over 50% of buyers are using FHA financing.  Since the FHA ceiling is $417,000, the effect on the upper price ranges is obvious. 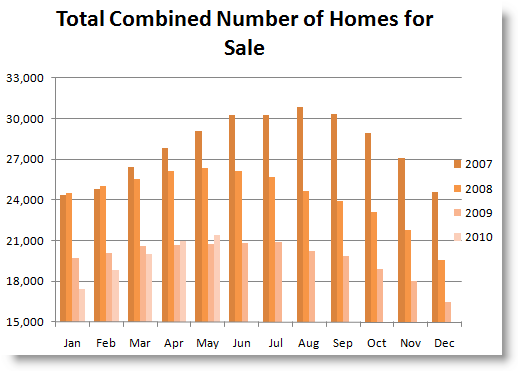