As we watch the Denver real estate market there are notable improvements and a few trends to watch.

The average single family residential sales price increased 17% from December of 2008, and 6% over November of 2009.  While the Denver area market has not yet recovered to the high water mark of $409,000 set in 2007, a 17% improvement from the same month last year is very positive. 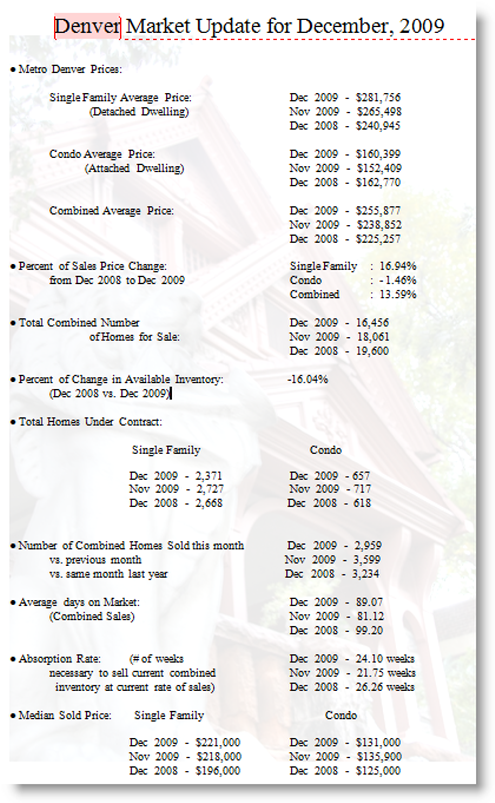 Available listings continue to decrease, both month to month and year over year.  Although some market segments, especially over $500,000, have a very slow absorption rate, the lower end of the market has slipped into a seller's market.  We can expect a multiple offer market for well priced, well maintained properties, at least in the first 6 months of 2010.

The Denver MSA unemployment stands at 6.8% over 3% points lower than the official national unemployment rate.  While there is no question that many people are underemployed and that the rate of compensation has lessened, the Denver MAS is one of the strongest of any major city in the country.

The lower sales and closing volume of December 2009 vs. December 2008 relates in part to the run up of sales in October and November to take advantage of the $8,000 tax credit, which was not officially extended until mid-November.

We can expect a competitive market for properties priced under $300,000 in March and April.

Entering the New Year, the interest rate for 30 year fixed rate mortgages is hovering around 5%. That will not last as both the market and inflationary pressures exert themselves.

The condo market will continue to be slow and a drag on the overall residential market. this has been historically true when the economy starts to recover from recession.

Recent Case-Shiller reporting (for the October market and NOT relying on Metrolist data) indicates the Denver MSA showed a year over year loss of -.01, making Denver the STRONGEST market in the country, with Dallas behind at -.06. It is  possible that the Denver area market will show positive appreciation for November, the first time in over 2 years.