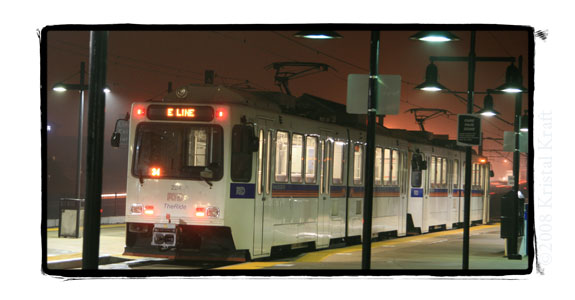 It seems hard to believe that Denver's first Light Rail line began service fifteen years ago, in 1994. That first effort, dubbed the Central Corridor Line, wound 5 miles from the Five Points terminus at 34th and Downing Streets, through downtown Denver, then south to its southern terminus at I-25 and Broadway, a location then important only for its 1000 automobile Park-n-Ride. The line was built for under 120 million dollars, and after the normal political battles that accompany anything that looks like change. Denver was a politically tumultuous place that year, with the new airport opening delayed for the 6th time to February 1995. In spite of the political and construction difficulties (tearing up downtown Denver to lay down tracks did not sit well) the line opened with fanfare and ridership success.

With the early success of the Central Corridor Line, the Regional Transportation District (RTD) moved forward to gain support for the first extension to the line. In 2000, the Southwest Line opened, extending service from I-25 and Broadway into Englewood and Littleton. The line proved so successful that the Park-n-Ride located at the southern terminus at Santa Fe and Mineral became instantly overuse, with passengers parking their automobiles in adjacent fields. The widely publicized success of the Southwest Line led immediately to the construction of the Southeast Line, incorporated into the complete reconstruction of Interstate 25 running through South Denver and the southern suburbs of Greenwood Village, Centennial, and Lone Tree. The Southeast Line opened in November, 2006, and has been very successful at moving people along the I-25 corridor into downtown Denver.

While the construction on the Southeast Line was underway, RTC managed to convince the voters in Metropolitan Denver to support a sales tax to expand the light rail system, and add a few heavy commuter rail lines, to bring rail transportation to the rest of the Metro area, including service to Denver International Airport. Considering the local citizenry's love affair with the automobile, this was no easy victory for RTD. This project, known as FasTracks (http://www.rtd-fastracks.com/main_1) is moving forward, despite costs overruns upwards of 2 billion dollars. Although expansion of the rail system continues to have public and political support, things have not gone as well as planned.

Other lines, including the Gold Line to Arvada, and the I-225 Line located in Aurora, are in the EIS stage, with operation of both lines to begin in the middle of the next decade. Other segments of the system will be so called "heavy" or commuter rail. RTD is creating public/private partnerships to complete these commuter rail lines in order to better use the available funding. These heady rail lines will bring rail service to Denver International Airport along the East Line: to Boulder and Longmont along the Northwest Corridor, and to Commerce City and Thornton along the North Corridor. The entire system is scheduled for completion by 2017.
An important aspect of creating rail transportation is transit oriented development of TOD. In a future we will discuss the effects of TOD and the zoning created for such development (TOZ).