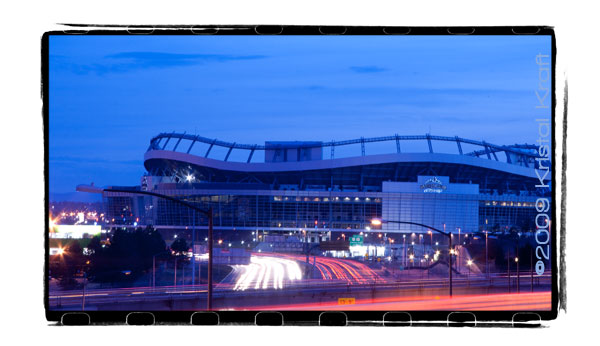 According to a 2009 survey completed by Men's Magazine,Denver is America's 4th fittest city.  Denverites swim more, cycle more, snowboard more, run more, and lift more iron than just about every other city in the country.  As it happens Salt Lake City is the #1 fittest city.  But here is the really interesting part, while Salt Lake has only one professional sports team,the NBA's Utah Jazz, Denver has an amazing 7 professional sports teams.  It seems that not only are Denver residents athletically active, we like to watch the pros (and semi-pros) demonstrate their prowess competing in just about every professional sports activity. Denver is one of only 13 cities with teams in all four major professional franchises, so we will start with:

The Denver Broncos - the 2 time Super Bowl Champion Broncos have been a fan favorite since the vertical stripe sock days in 1960.  The Broncos continue tosell out every game in the new InvescoField.

The Colorado Rockies - Denverites waited a long time for professional baseball, and remain excited and passionate about the National Baseball League's Rockies.  Playing in one of baseballs newest venues, Coors Field, attendance fora day at the park is among the highest in baseball.

The Denver Nuggets - Playing at the Pepsi Center, the NBA's Nuggets are a constant fan favorite. From the days of the AAU's Denver Truckers, basketball has been an important part of Denver's sports scene, and the current Nuggets team is providing playoff excitement every year.

The Colorado Avalanche - Denver's NHL team shares The Pepsi Center with the Nuggets.  Denver hockey fans have been high on hockey since the team moved to Denver from Quebec, bringing the Stanley Cup to Denver twice in the their first 6 years playing in Denver.

Denver alsois the home of two professional Lacrosse teams, the Denver Outlaws, playing in the MLL atInvesco Field, and the ColoradoMammoth of the NLL, playing at the Pepsi Center.

Soccer fanswatch the Colorado Rapids fill up the new Dick's Sporting Goods Park, the professional stadium being just one of 24 soccer fields at the complex located just out of Denver in Commerce City.  Dick's Sporting Goods Park also hosts Rugby matches, and just about every other kind of turf based sport except American Football.  And, speaking of Rugby,Denver's inner city suburb of Glendale completed Infinity Park in 2008, home of the Colorado Raptors and possibly the best Rugby facility in North America.

At another time, we will offer a post on the local college teams, and some of the semi-pro sports played in Metro Denver.