Bryce Canyon National Park is one of the most beautiful places on earth. Time and weather has carved amazing sites of color and contrast. It is a photographers dream location. One can stand in the same spot and take hundreds of interesting photos over the course of hours. 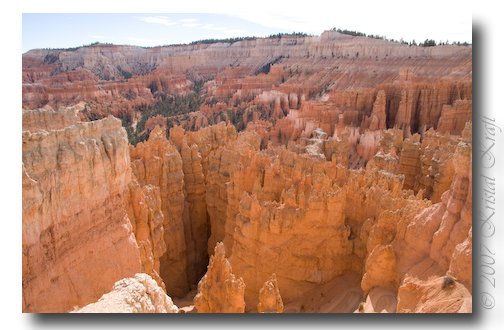 Larry and I hiked into the canyon, which is not an easy walk in the park. The terrain is steep and the trail is narrow. One must pay attention to every step, for a wrong step a twisted ankle could by the difference between life and a very bad day.

Our experience was rich in enjoyment. My camera in my hand the entire time. On one of the switchbacks, I saw a man go down on his stomach reaching over the side trying to retrieve an object. I couldn't see what he was reaching for, but he was putting himself in a predicament beyond safe. I turned my camera toward him, thinking the horrible, I would catch a shot of him as he went over the steep side. 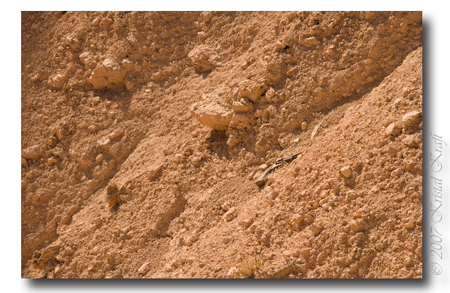 Lucky for the man, he gave up. As we approached him, he said there was a gun down there. He wanted to retrieve it.

He was right, it was a gun. We couldn't tell if it was a relic from Butch Cassidy or the Sundance Kid or a toy. I changed lenses but still couldn't determine if the gun was real or not.

So I shot the gun with my Canon. Twice! 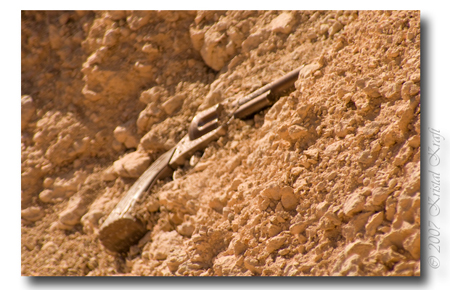 We ended up forgetting about it, until the thought occurred to me to ask someone. I emailed the park asking if they were aware of a gun on the hillside. They were very concerned and wanted to know the location and if I would send them photos. I obliged.

A few hours later in a follow up email the Park Ranger said he sent several rangers out to retrieve the weapon. It turned out to be a child's toy. They thanked me for bringing up the matter, saying others may have put themselves in danger trying to retrieve the gun.

I must say I was a little disappointed not to have found a relic from the old west. But I was impressed with the efficiency of the Park Rangers who were very concerned for the safety of their guests.

It's nice to know the most beautiful real estate in the country is in good hands.

Now tell me folks, does that gun look real to you?