The people of Metro Denver demonstrated you can fight the media and score! 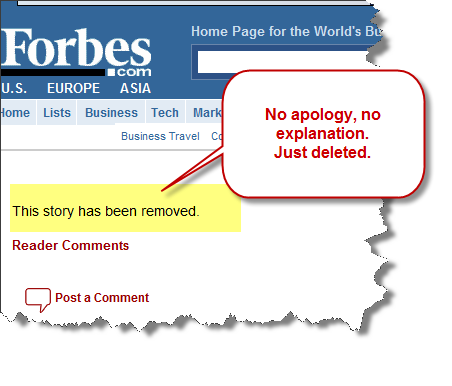 If you have been reading my last several posts, you will be aware of how Forbes placed Denver as #2 of the Worst Housing Markets coming as a severe shock to real estate professionals who watch the market, and seasoned veteran of the Denver real estate reporting world, John Rebchook, Mayor John Hickenlooper and scores of others.

Today Forbes deleted not one, but two online posts relating to the false and inflated stats found by writer Francesca Levy.

The report came as a surprise to many experienced people who watch and know the Denver real estate market. Many who asked or in the case of the Mayor DEMANDED a retraction, I was told personally by Francesca Levy that Forbes doesn't do retractions, just more reporting.

Well Forbes second article failed to take personal account for making the mistake to begin with.  Instead they  pointed the blame at Zillow, who had Francesca Levy bothered to ask would have informed (suggested) she not use the stats they presented for her specific article.

COO Spencer Rascoff clarified Zillow's position in an email  (I reprint with his permission):

Hardly.  What about the crushed hopes you dashed by dissing the Denver real estate market.  How many homes will fall into foreclosure because deals mercilessly died for your lack of journalistic accountability?  How many hard working honest real estate brokers had to spend an evening with clients explaining, yet again why your article(s) don't jive with reality, instead of being present  at their kids' games?

How much damage can you cause a city?  How much is that times ten?

How much harm has Forbes caused in printing crap?  Not just ordinary crap, but harmful crap?

It angers me greatly how you can cause such harm and never say, "gee I'm sorry I goofed."

We need to be vigilant in watching the media.  Make them report the truth. Hold their feet to the fire when they don't.

Yes, this silly little blog doesn't get the traffic that Forbes.com does, but by golly I can and will screech and scream until someone notices.

Forbes shows us, if you can't compete, delete.

P.S. Oh by the way if you would like to read the original articles let me know, I have saved them. :)

Forbes needs to know, "What happens in Vegas stays in Vegas. What happens on the Internet gets posted to blogs, backtracked, tweeted, Facebooked, and saved to KK's PC"