Putting out the flames doesn’t dim the love 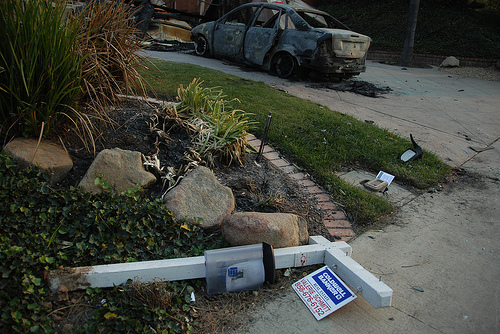 As a tribute to the displaced people in San Diego County there’s not much I can do or say that will ease the pain. Having never lost a home I can’t evan stake claim to knowing what it feels like. It must be a horrible feeling.

Roberta Murphy who writes the Luxury Home Digest in San Diego blogged “San Diego Fires: Coming Home to Ashes” Roberta sums up the spirit of many residents who aren’t willing to give up their neighborhoods. Community spirit is alive and well for many. Instead of pulling up stakes and fleeing for safer territory, many plan to rebuild their lives exactly where the fire took everything from them.

Everything that is but their love of the area and each other.

It makes me wonder, what would it take to get me to move, to leave a place that is dear to my heart? As hard as it is to imagine the situation, I do believe I too would dig in my heels and pull together to rebuild. There’s strength in commitment. There’s power in a goal.

What better goal than to make something better than ever? You go San Diego County People!

You can do it.