The Four Seasons in Denver

One of the really great things about living in Denver is the weather. The weather at the foot of the Rocky Mountains 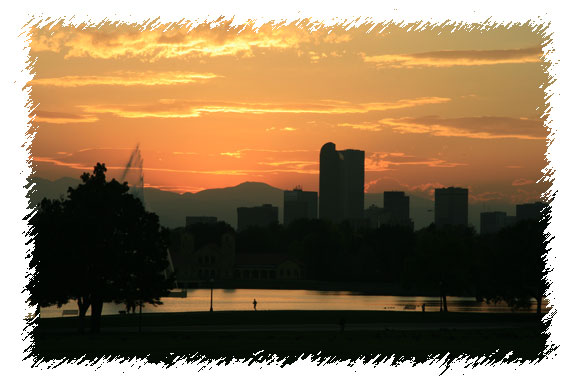 offers 4 distinct seasons, including a generally mild fall and a summer where temperatures seldom break a hundred degrees. The Metro area is dry, with the average precipitation being less than 16 inches, and the humidity seldom exceeds 40% except in winter. Chinook winds roll down from the foothills in the winter months, melting most snowfalls in a few days, while making it possible to play golf year around.

Summer in Denver:
Usually by mid June summer is well under way. The sometimes violent spring storms give way to a dry, desert like heat, making outdoor activities pure joy. July is the hot month, but most evenings cool to allow for bar-b-cues and great sleeping. August usually sees monsoonal rains in the afternoon, with lightning forcing people under cover for short periods of time. By mid September, summer is winding down, and the air has the smell of fall.

Fall in Denver:
Fall in Denver is usually mild. While snow can happen, it is seldom seen before Halloween, and not often in accumulating amounts. Mountain snowfalls begin by mid-October, with the major ski areas open by Thanksgiving, even if the snow base is man made. Denver does not often entertain a white Christmas, but by early January, the night temperatures sometimes drop below zero. Day time temperatures in the mid-fifties allow for frequent mid-day rounds of golf.

The Winter Months:
Winter in Denver can show its icy face in early November, and hang around like a pesky varmint as late as the first of May. The really wintery days are usually early January through mid March. With the sun visible at least part of the 300 days we count as sunny, snowfalls are short-lived, and below zero nights don't seen as noticeable.

Springtime in the Rockies:
Well, not quite. Perhaps springtime at the edge of the Rockies is more apt, with days warming by mid-March, and the really cold nights fading into memory. Denver's greatest snowfall time is March and April, with some days in April feeling like all four season happening at once. Those gorgeous mountains in the west create havoc with weather systems, and sleepless nights for weather forecasters. Denver's western and southern suburbs can see a foot of snow at 6000 feet, while the mile-high downtown area receives nothing more than a heavy drizzle. But those fast melting spring snowstorms really do bring May flowers, and green grass. Afternoon thunderstorms are frequent in May and early June, but they pass by quickly, leaving sweet-smelling evenings and cool nights.