One of the benefits of being in the real estate business for as long as I have is the valuable life lessons I have experienced. Some of my lessons are fun and easy others I prefer not to repeat.

A favorite memory has to do with listing a home with curb appeal. I was called by the 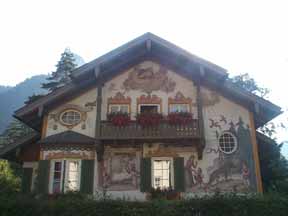 homeowner to sell a charming little cottage on the hillside in the town of Manitou Springs (I used to work in Colorado Springs.) Manitou is at the foot of Pikes Peak. It is a charming historic town filled with character and unique homes.

This home was a cabin, built by the homeowner's deceased husband. You could tell the home had been loved and cherished for many years. Every inch of the interior and exterior was artfully manicured and maintained. The front yard was terraced and landscaped with shrubs. The window boxes were filled with cascading flowers in their prime.

The home could have been a Bavarian postcard, it was perfect.

The day we put it on the market was a difficult one for the homeowner. She had planned this day for a long time and had a place to go somewhere in sunny Arizona. Even so, I could tell it was very difficult for her to put this part of her life behind her. Looking around the home I could understand.

Resolutely she proceeded to sign the documents. She was determined to sell and move on. When we finished the paperwork, I went to my car to get the For Sale sign out of the trunk. We surveyed the front yard and together determined the best location for visability and concern for the landscaping.

She stood on the deck as I held the sign up high in order to drop it sufficiently deep enough into the turf. As the sign penetrated the earth, the air was filled with the screeching of brakes.

A little red sports car came to a sliding stop in front of the house. No, it wasn't an accident. The driver shouted to me, "How much for the house?"

He continued to tell us he was very late for work, but if I gave him my card, he'd call me to work out the details.

Flabbergasted I turned to the homeowner. Hands on her hips she looked at me and said, "I could have done that!"

Actually she was the one who did make this "sale" go quickly. It was her years of toiling in the soil that paid off in spades. The value of curb appeal is priceless.

P.S. As it turned out the young attorney could not afford her house. We ended up selling it to another buyer a couple weeks later. Still the story is a good one. It is a true story from Kristal Kraft's war chest of real estate drama.