Denver is a Sporty Town!

With the acknowledgement that Denver's professional sports teams have been featured on this blog before, there are 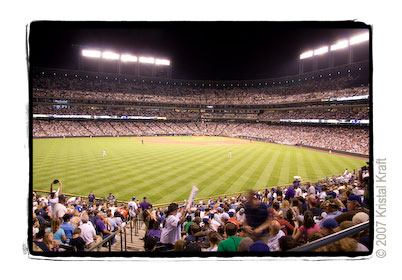 just a few more things to say. This Thursday morning's Downtown Denver Partnership meeting featured a presentation about the Denver sports scene that added weight to the idea that sports in Denver is a very important part of the local landscape.

The Metro Denver Sports Commission, an organization few people outside the industry has even heard of, has been doing great things to make Denver THE sports city in the United States. The Commission has been instrumental in bringing all six of professionals sports All- Star Games to Denver rover the past 10 years. Considerable effort has been expended to support the creation of a strong sports infrastructure, with 7 state of the art venues becoming part of the Denver community since 1995. Denver's Major League Teams al play within walking distance of Downtown Denver, which has become a vibrant place to be, not just because of the sports teams, but such venues as the Denver Center for the Performing Arts, the Colorado Convention Center, and the Denver Art Museum share the same hotel venues as the Pepsi Center and Coors Field.

Colorado has become #5 in vacation destinations for the United States, in part because of the sports infrastructure and competitive and exciting teams. Denver is the smallest city to host a team in all of the major sports franchises, with strong fan support for all seven.

The attitude in Denver is positive and full of hope, in spite of the economic difficulties the country is currently experiencing. As one the speakers said at the morning breakfast, sports brings the message of hope. If that is true, Denver could not be more hopeful, now, or in the future.